Stream the song across all digital platforms now, or purchase on Bandcamp

LIAR – A new song by Colorama. 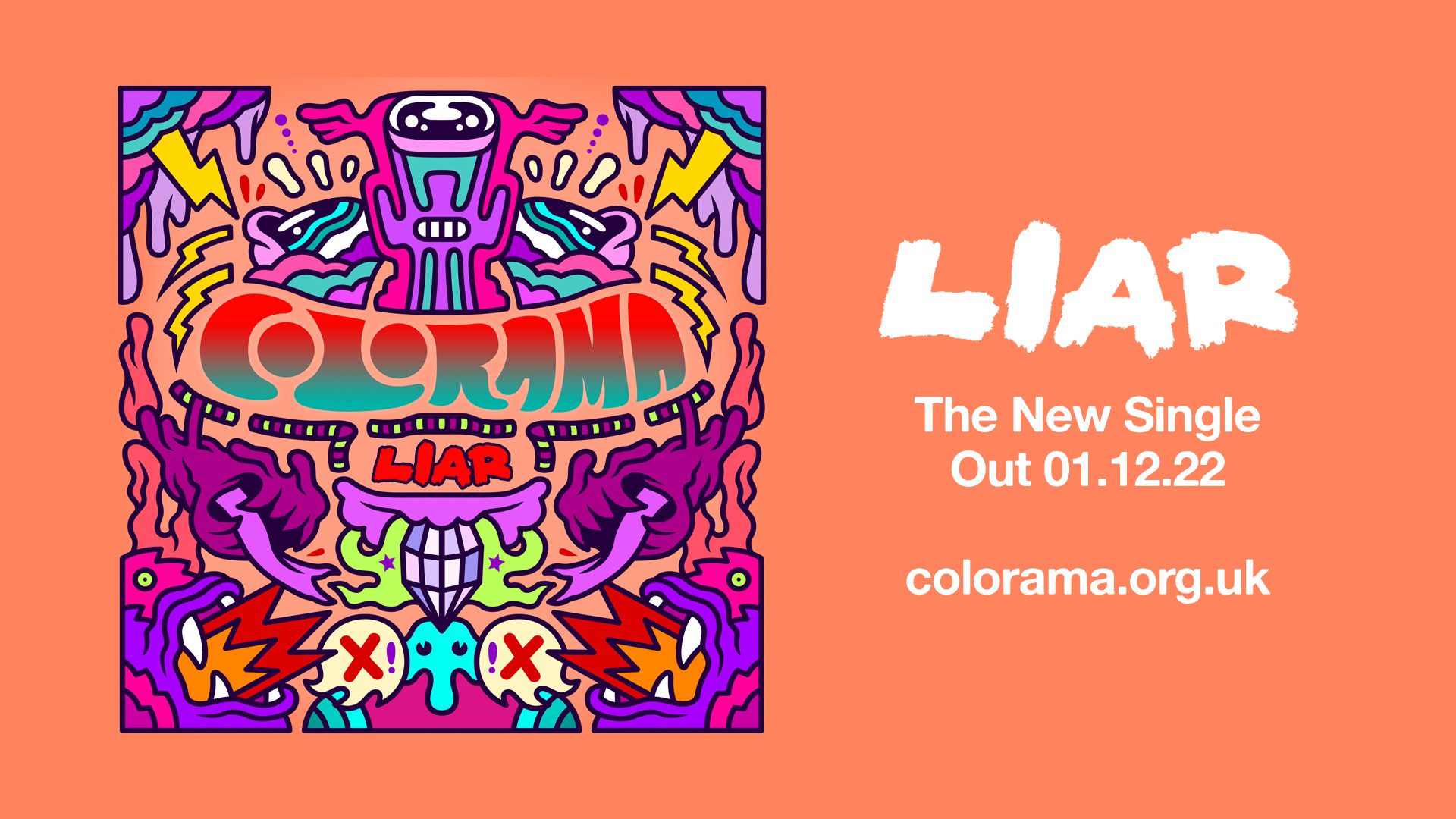 ACROSS THE WATER NOW AVAILABLE ON LP & CD! 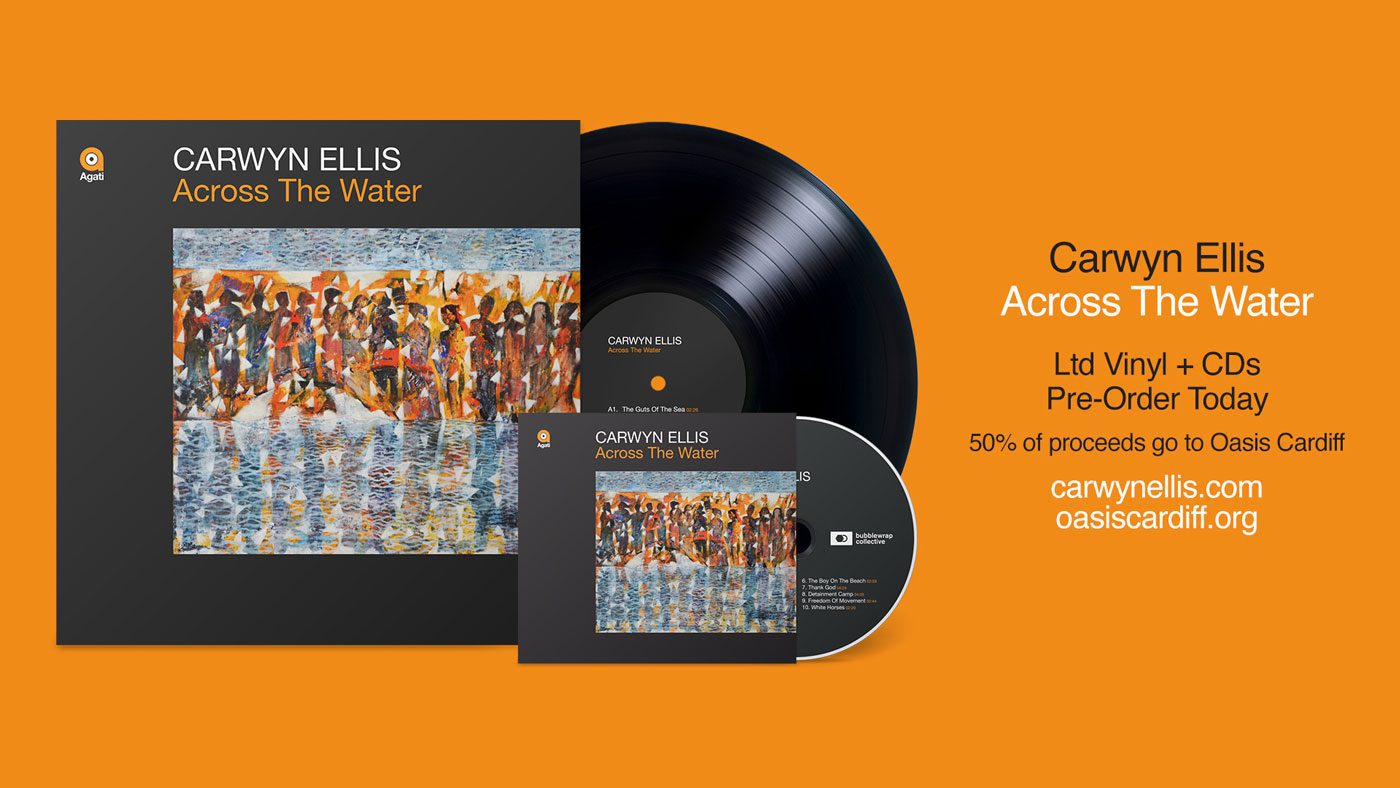 After a digital only release earlier this year, I’m happy to announce a very limited run of  ‘Across The Water’ on LP & CD. Released in conjunction with the brilliant Bubblewrap Collective, it’s available to pre-order via Bandcamp now with 50% of all proceeds going to the Oasis Centre for Refugees and Asylum Seekers in Cardiff, Wales. The vinyl LP version is a limited edition of 100, while the CD is an edition of 200. So don’t delay – pre-order today!

“This album is dedicated to the brave people who’ve crossed the oceans across the millennia in search of a better life – people to be admired and respected, not vilified and scorned. And it is dedicated to the memory of the many who tried but did not make it, but hopefully found peace instead.” 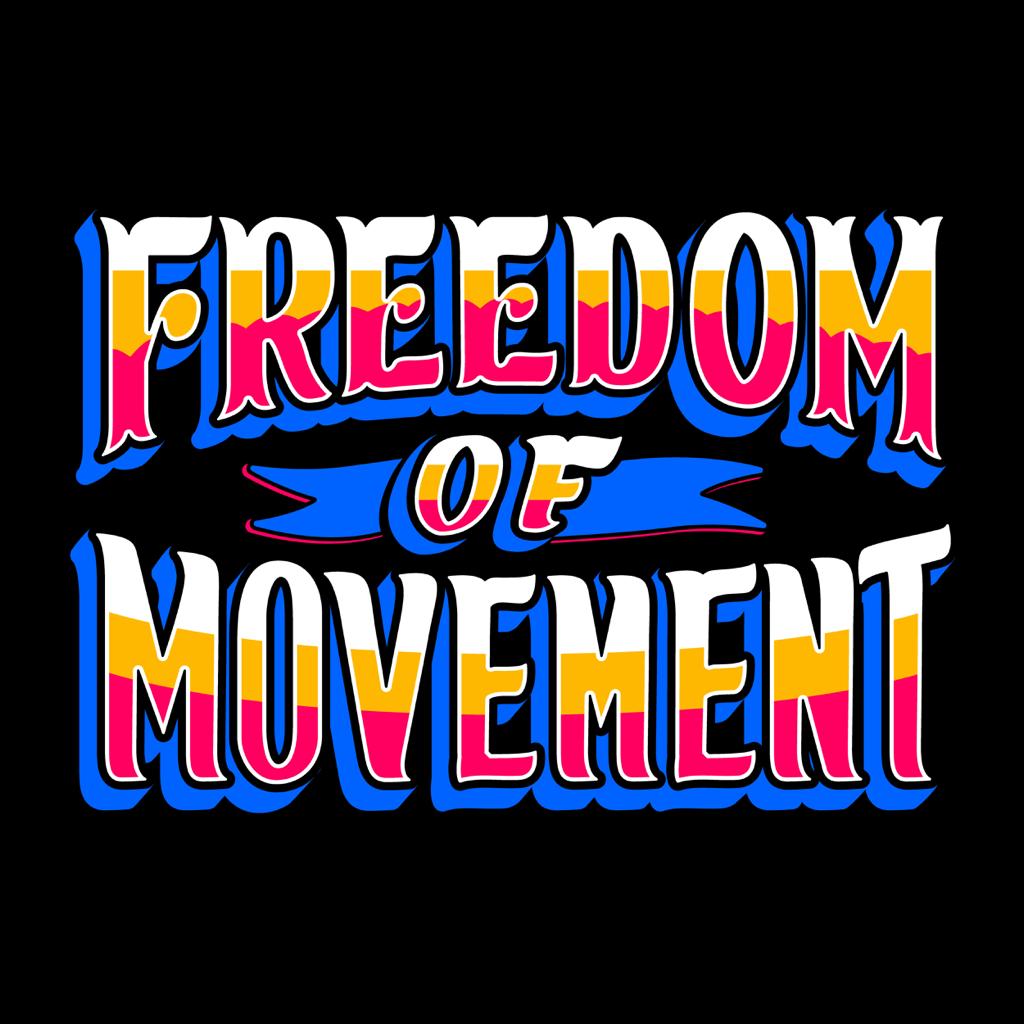 We’re delighted to announce the release of Freedom Of Movement (Rio 18 Remix) – a new version of the song from Carwyn’s recent solo album, Across The Water, only this time it’s produced by the mighty Shawn Lee and features members of Rio 18 too!

As with the album, 50% of the proceeds of this track will go to the Oasis Centre For Asylum Seekers And Refugees in Cardiff, Wales so please give generously if you can 🧡

For more info about the tune and to download or donate, visit: 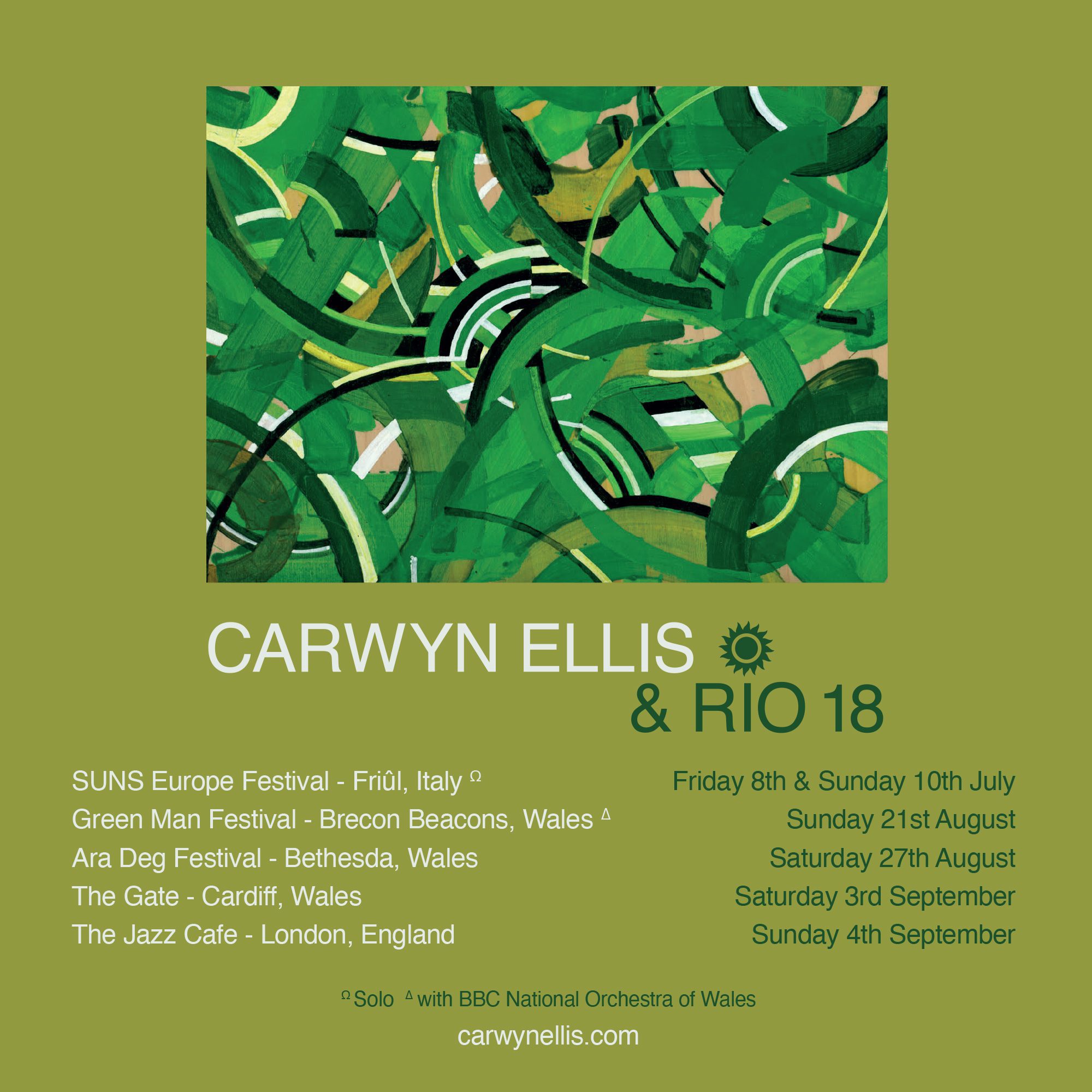 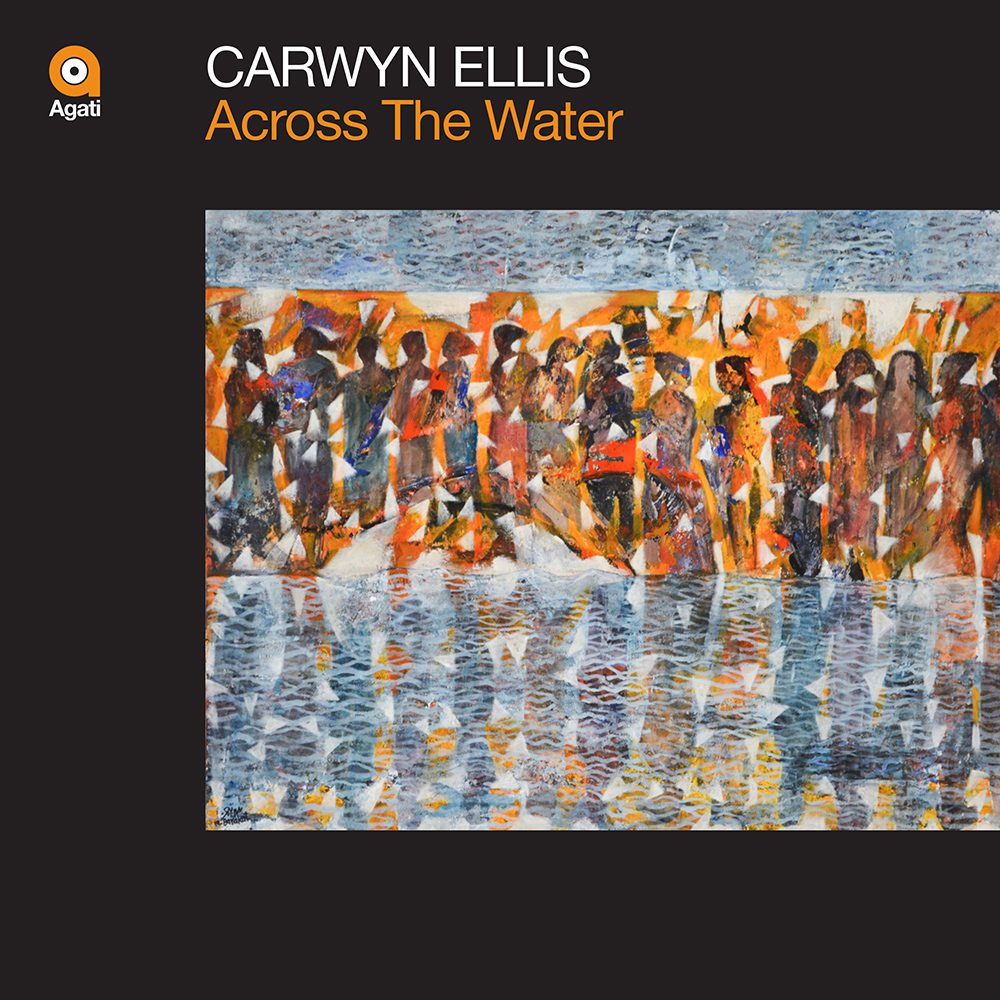 I’ll be releasing my first solo album ‘Across The Water’ this Friday May 6th.

It will be a digital release available exclusively via Bandcamp for the time being with 50% of all proceeds going to Oasis Cardiff, a centre for asylum seekers and refugees in Cardiff, south Wales.

More info to come but you can hear the title track in all the usual places now. 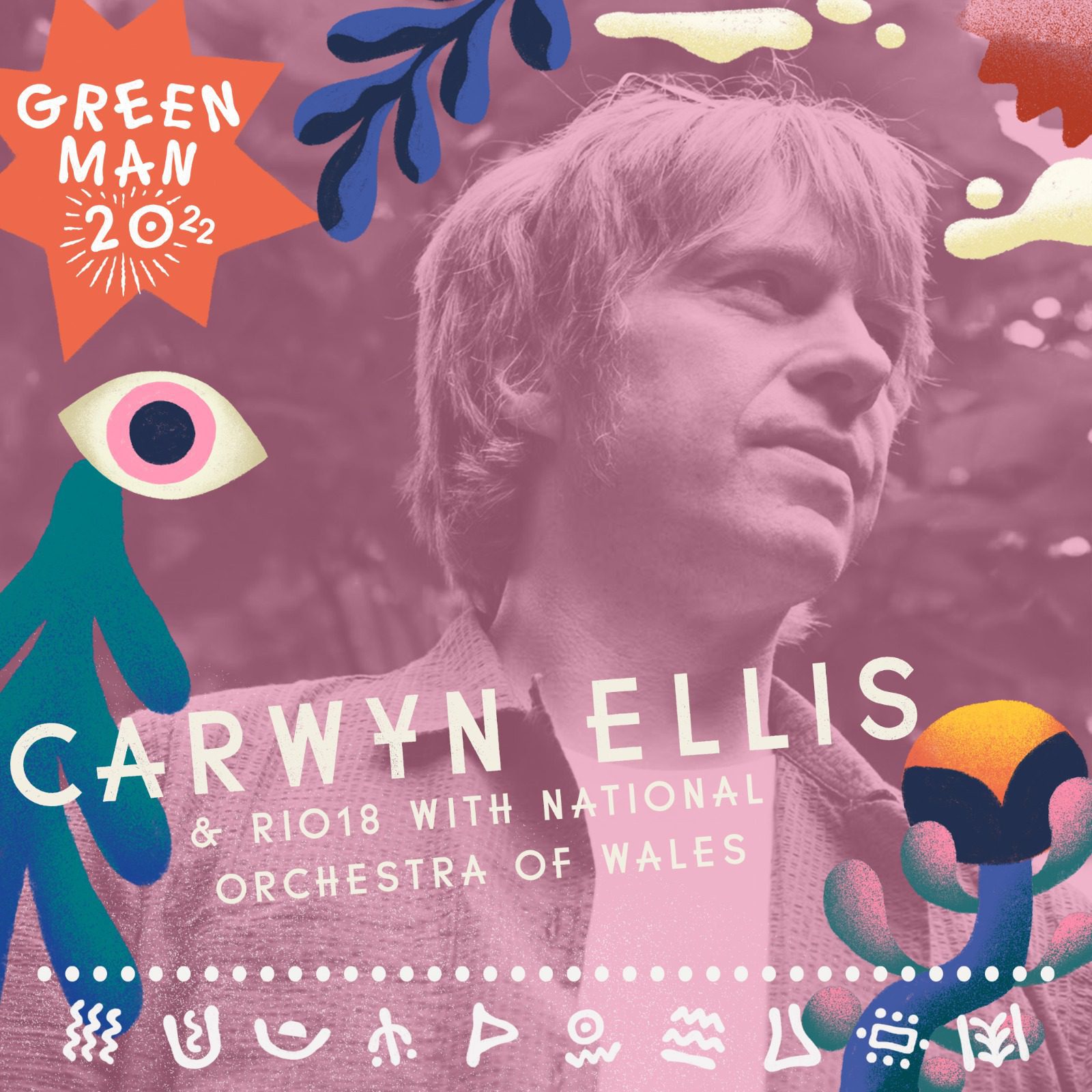 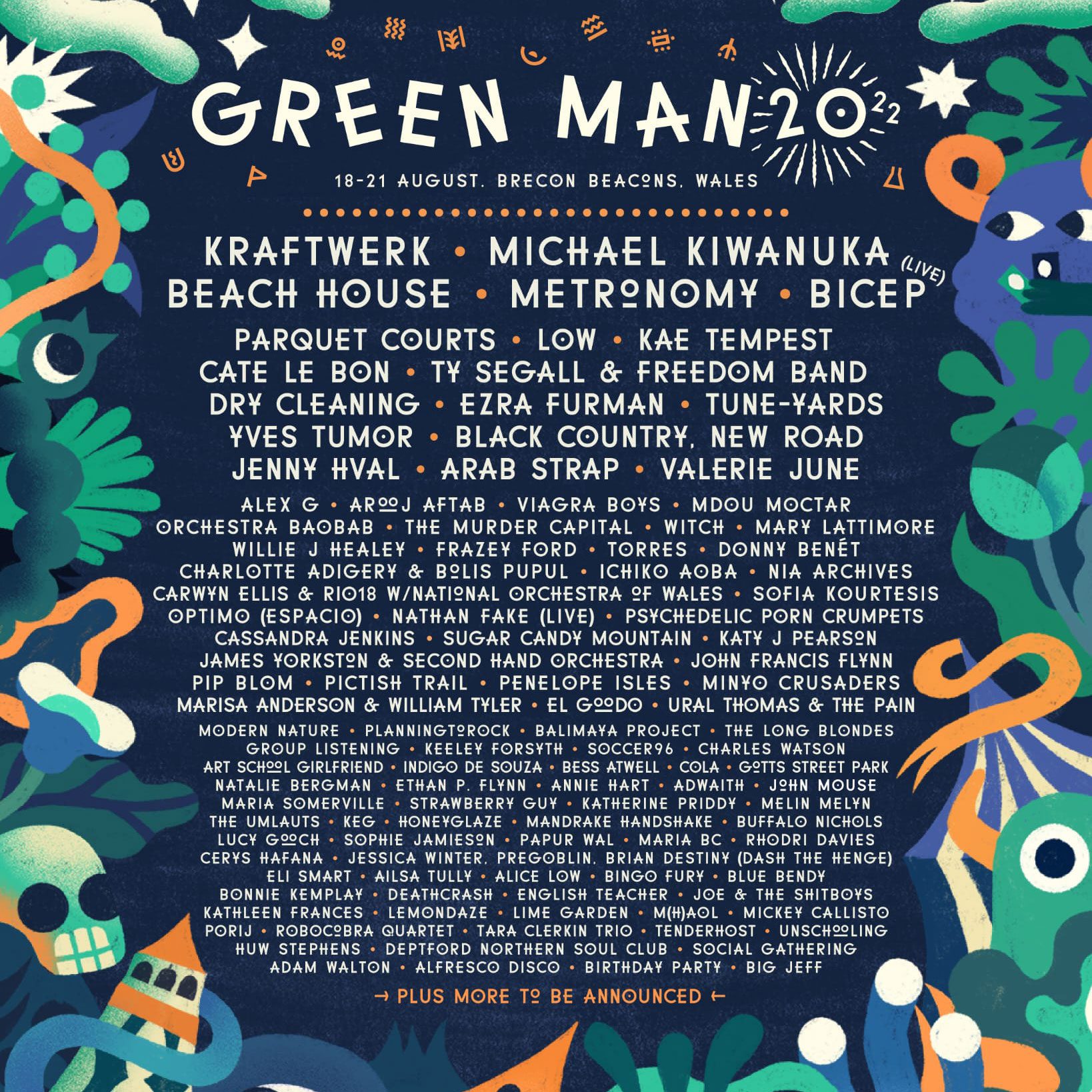 Delighted, no thrilled – no ASTOUNDED to announce that Carwyn Ellis & Rio 18 will be performing at Green Man Festival in August WITH THE BBC NATIONAL ORCHESTRA OF WALES!! That’s right – full band and orchestra. I think it will be very, very good. Get a ticket if you can. 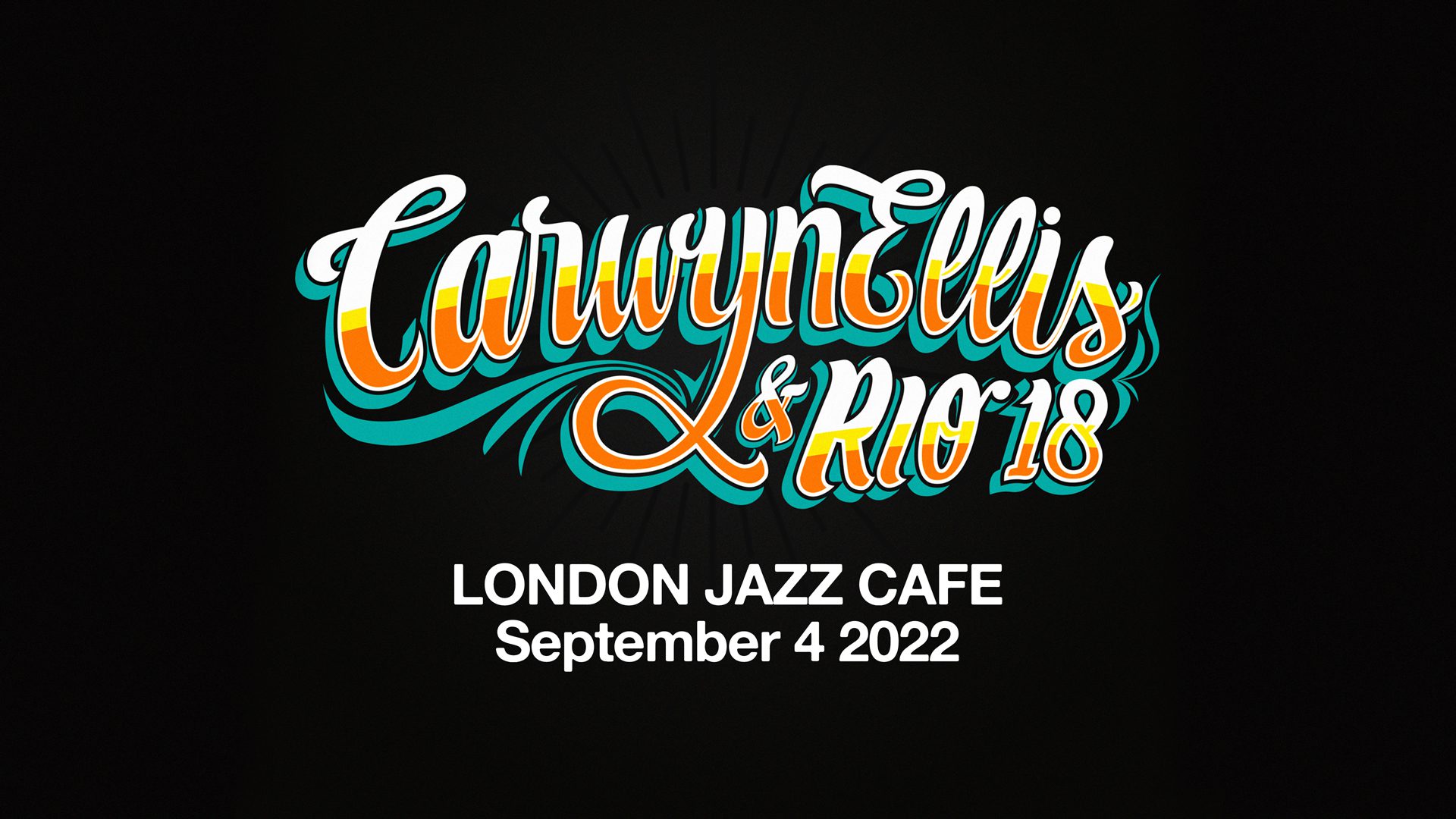 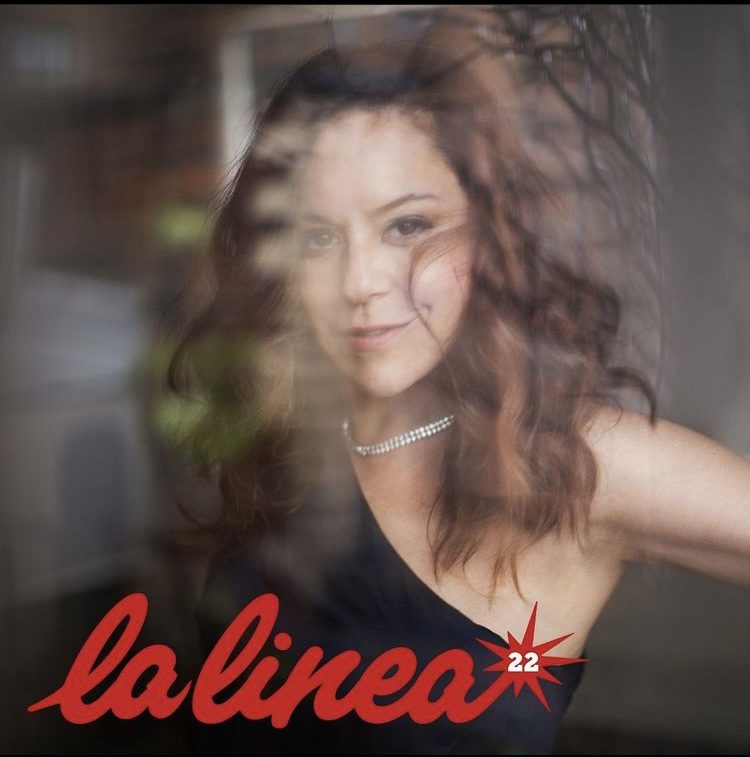 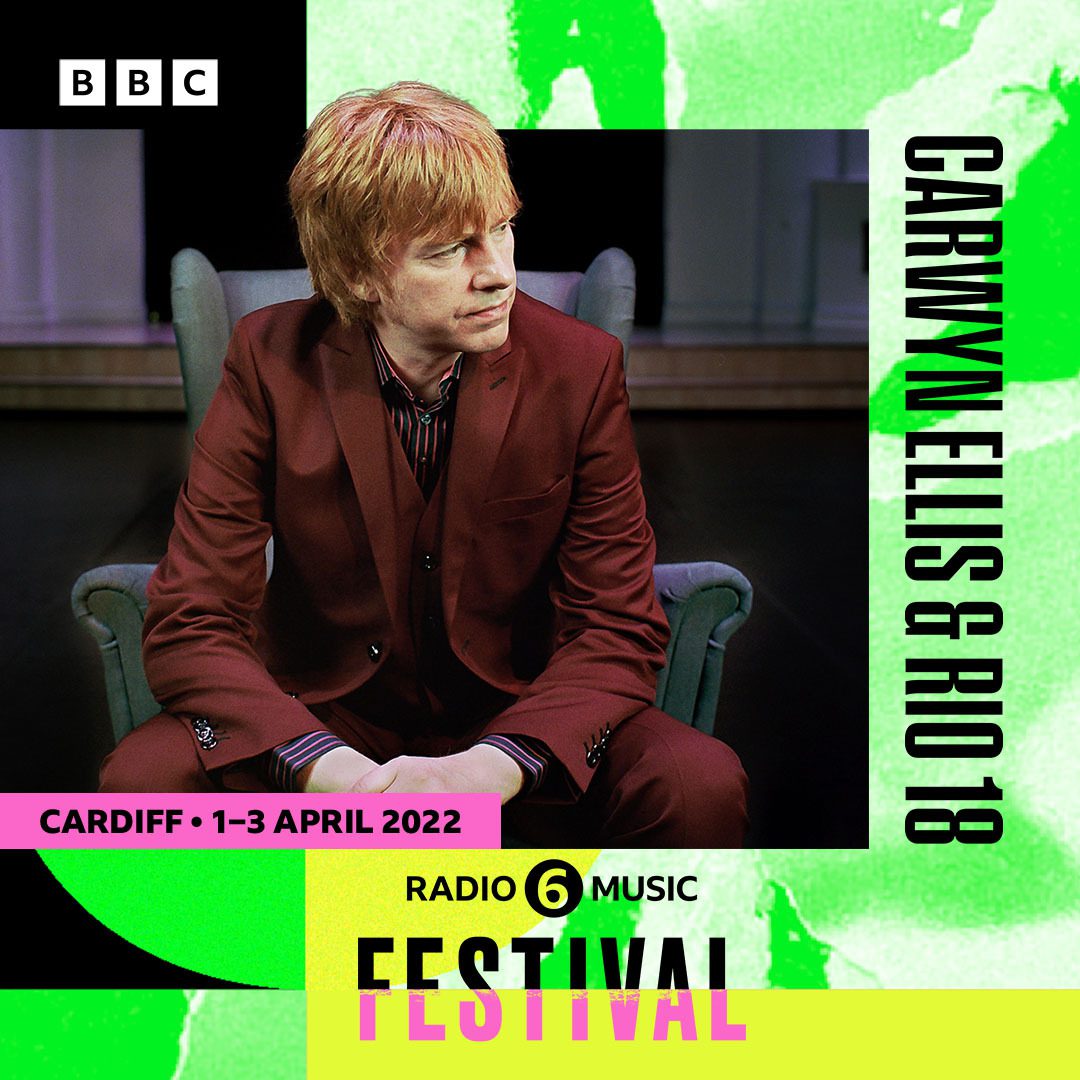 Hello there. After more than two years away, Carwyn Ellis & Rio 18 are finally going to be playing live shows again!

I’m delighted to say that we’ll be opening for the magnificent Bebel Gilberto at the Royal Festival Hall in London as part of the La Linea Latin Music Festival on Sunday March 27th. You can find more info and tickets HERE

The following weekend we’ll be back in Cardiff, performing at the BBC Radio 6 Music Festival at the Tramshed on Saturday April 2nd. More info and tickets HERE

These shows will be our first together since 2019 so they’re going to be SBESHAL. Can’t wait!

The Yn Rio LP by Carwyn Ellis & Rio 18 with the BBC National Orchestra of Wales is back in stock! The re-press is available in a gorgeous handcrafted tip-on sleeve, classic-style. Available in record shops, our Bandcamp (UK) and Légère Recordings (EU).

LISTEN / BUY NOW
‘Yn Rio’, the new album by Carwyn Ellis & Rio 18 with the BBC National Orchestra of Wales is available on LP & CD and via your preferred streaming service NOW!

Late in 2020 as a global pandemic was raging, BBC Radio Cymru approached Carwyn Ellis with a view to performing a radio concert with Rio 18 and the BBC National Orchestra of Wales.

There would be no audience present. The orchestra would have limited numbers due to social distancing measures. And as the pandemic worsened, it became clear that Rio 18 themselves would not be able to travel or rehearse together either.

But the show must go on! So Carwyn adapted. He came up with these songs, and began recording them alone at home. Then, he sent them to his co-producer Shawn Lee who added drums and percussion at his studio in London. With these elements, the rest of the band were able to add their contributions from wherever they were, with Shawn co-ordinating the group’s recordings into the super tight tracks you hear here. Rio 18 did not see each other, or play together at all during the course of this process! Which is truly remarkable because the energy, joy, love and pure magic is palpable in these recordings.

And so, at 8pm on March 20, 2021, Carwyn Ellis sang and played these songs with the BBC National Orchestra of Wales in one take, over the course of an hour or so. The full show was broadcast the following day on BBC Radio Cymru (no time for re-takes or overdubs!) and was more than we could ever have hoped for. This record is a document of the thrilling new music created in that performance.

These are songs of hope, history and harmony, recorded in exceptionally challenging circumstances but in a spirit of international brother- and sisterhood, showing just what we can achieve if we dream, work and play… together.

You can read more about this epic undertaking (and hopefully enjoyable listen) on the Bandcamp page.

“I sat in the room when the BBC National Orchestra of Wales accompanied Carwyn Ellis at this very special concert. I’m so glad this record is being released; it shows the depth of Carwyn’s talents and takes us somewhere very special!”

We’re very pleased to share with you ‘Y Bywyd Llonydd’ (‘The Still Life’), the second single from ‘Yn Rio’, the gorgeous new album by Carwyn Ellis & Rio 18 with the BBC National Orchestra of Wales.

With the group’s principal producer, the Rio de Janeiro-based Brazilian polymath Kassin unable to participate in this album (it was written and recorded during the depths of the Covid winter of early 2021), Carwyn set about thanking him in the purest possible way, translating Kassin’s beautiful bittersweet break-up song ‘A Paisagem Morta’ to create ‘Y Bywyd Llonydd’. “It actually means ‘still life’, but the titular Portuguese words literally translate as ‘the dead landscape’, which in itself is beautiful.”

With another superb arrangement by the Brazilian maestro, Christiaan Oyens, and amazing artwork by Michael Gillette, ‘Y Bywyd Llonydd’ is available to stream on all your favourite paltforms now!

A truly international project, it features players from Wales, Brazil, Venezuela and USA – and the simple Portuguese greeting, ‘Olá!’ is coupled with a message of hope, friendship and working together for the better times to come!

Musically, ‘Olá!’ Is a love letter to the Samba music of Brazil and the video, our third to be made by Tocavideos of Rio de Janeiro, illustrates this wonderfully. It was filmed on location at Portela Samba School in Rio – one of the samba schools which compete at the carnival and are places where the community can learn instruments, dancing, costume making and all sorts of arts and crafts. And proudly represent their neighbourhood! The samba schools are the beating heart of samba music and culture in Brazil.

We’d like to sincerely thank the Portela Samba School and community for allowing us into their world and letting us share a glimpse with you. Enjoy!

Never one to sit still, Carwyn Ellis is continuing his voyage into Latin Americana with the release of a new album with Rio 18, ‘Mas’.

Like it’s predecessor, the acclaimed ‘Joia!’, this album is a collection of songs sung in Welsh combined with distinct pop and South American flavours drawn from Bossa Nova, Cumbia, Samba and Tropicalismo styles, recorded in Rio de Janeiro, Caernarfon and London.

Mas feels strangely right for our times: an album whose title means several things, as befits its global outlook. Mas means “out” in Welsh, “more” in Spanish, and “but” in Portuguese: these meanings filling that single syllable with promise, potential, but also the subtle edge of a warning. It’s a mood that fits the more political tenor of Rio 18’s second turn around the world, as Carwyn and his friends explore some substantial subjects: the drowning of villages, climate change, migration and the rise of megacities. They do so not in sober, serious settings, but beautiful, uplifting songs. Other tracks also celebrate the vivid pleasures of love, nature and our essential humanity.

Mas is a record of beautiful songs that says, wait, listen, delight, come together, then act. We owe it to ourselves, to each other, to our beautiful world.

A song equally influenced by Georgie Fame, Sergio Mendes and Kassin (its producer), Lawr Yn Y Ddinas Fawr (‘Down In The Big City’) concerns those hours around dawn between throwing out time at the clubs and when people start to go to work. A time of limbo, wherever you are in the world. But a great time to see a city, when there’s no-one around. So long as you can stay awake!

The first song to be taken from the forthcoming album by Carwyn Ellis & Rio 18, ‘Mas’, Ar Ôl Y Glaw [After The Rain], is a “lockdown-flavoured reaction to the horrible swirling nastiness in America that we saw earlier this year,” says Carwyn Ellis. The song talks of the hope that we have to cling to after such troubling events, its mood inspired by a YouTube clip Carwyn loves of Donovan and Sergio Mendes singing Donovan’s song, ‘There Is A Mountain’ together. Marged Rhys (of Welsh folk trio Plu) co-wrote it, Carwyn sending her the original demo and chorus, which she finished, he laughs, “unlike me, at lightning speed”.